As certain states expand the acceptable shades of blaze for hunting season, we are wondering, is pink the new orange?

Before the start of each hunting season, I pull out my collection of camo shirts, pants, jackets and boots, and play mix-and-match while checking the weather forecast for how many layers I’ll need to pile on. The last flourish to my woodland uniform is a blaze orange hat and vest. But this year, while flipping through my hunting regulations booklet, I noticed it stated, “Every hunter shall wear a solid blaze color (orange or pink) …” Pink?

Humans see the colors on the warmer end of the color spectrum (reds, oranges and yellows) better than the cooler colors (greens, blues and violets). Think about the colors you see while driving—red stop signs, yellow school buses, orange traffic cones—things that are important for us to see and identify quickly.

According to the National Safety Apparel website, “Orange is the required safety color to allow hunters to be recognized by one another in complex backgrounds that are often green or brown. Because this man-made color does not occur naturally in the forest, it is easier for the human mind to recognize fluorescent orange as marking a human figure. Advocates began promoting wearing orange while hunting in the 1960s, as it was the easiest color to see and recognize in the hunting environment.”

In 1961, Massachusetts was the first state to legally require hunters to wear blaze orange. Prior to then, many hunters traditionally wore canvas coats or red and black buffalo plaid woolen jackets during hunts. This color pattern harkens back to a Scottish tartan that was later brought to the United States. The color red appears green to a deer, and the checked pattern helped break up your shape in the woods. But red is still a color that occurs in nature, leading safety advocates to turn to a blaze version of orange to positively differentiate hunters from game in the field. Orange is also a color that deer cannot detect. 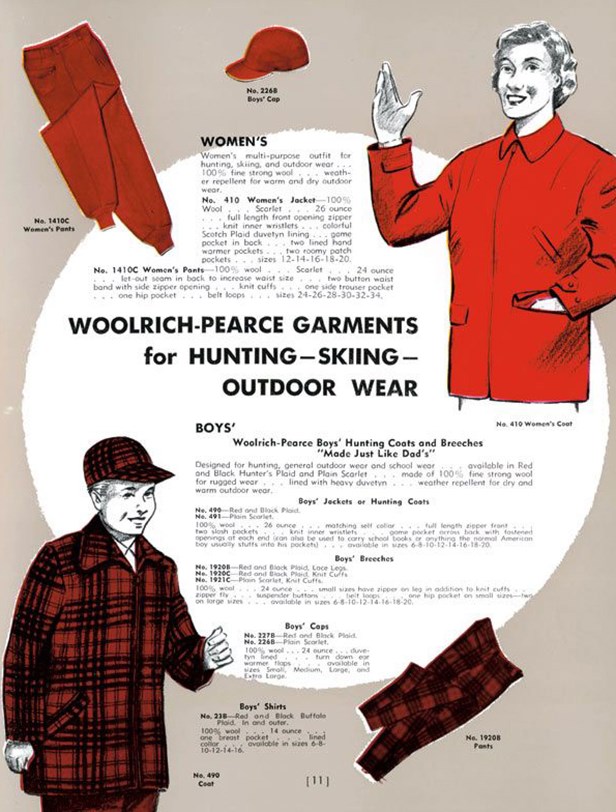 And it works. Through the efforts of hunter safety education and with the introduction of high-visibility clothing, the number of hunting fatalities has dropped steadily through the years. According to an article in the NRA Official Journal American Hunter, “In the 1960s, the five-year average of hunting accidents in New York was 19 per 100,000 hunters; today the five-year average is 1.8 per 100,000 … In the 1960s, hunters in Colorado averaged nine fatal and 24 non-fatal accidents per year … Today, Colorado sees about five non-fatal hunting accidents per year and 1.2 fatalities per year, according to Colorado Parks and Wildlife.”

The modern fluorescent dyes used to create “blaze” or “hunter” colors are what make them appear so vibrant to our eyes. Fluorescent colors are two to three times brighter than the base color they are derived from. All pinks are not created equal. Pastel pinks, fashion pinks and many pink camouflage patterns are not the same as blaze hunter pinks.

Many camo patterns are great for blending into the landscape, but they may not have the appropriate fluorescent dyes to make them highly visible to other hunters.

In 2016 Wisconsin became the first state to officially allow fluorescent pink alongside orange as a safety color for hunters. While deer are indifferent to the color, pink is undeniably controversial in the human hunting community. Since Wisconsin’s adoption of the hunter pink color, only nine other states have followed its lead: Colorado, Illinois, Louisiana, Maryland, Minnesota, Virginia, Wyoming, Washington and just this year, New York.

For a long time New York remained one of the handful of states that did not legally require that any type of high-visibility garment be worn during any of its hunting seasons. However, for the first time, New York hunters must don a fluorescent orange or pink hat or vest during the 2021 upcoming firearms season.

Advocates of blaze pink state that it is just as visible as orange. They argue that it is an unnatural color in the forest and that the pink hue stands out better against the yellows and oranges of fall foliage than blaze orange. A counterpoint is that people who are color blind in the red/green spectrum have a harder time seeing the color pink. 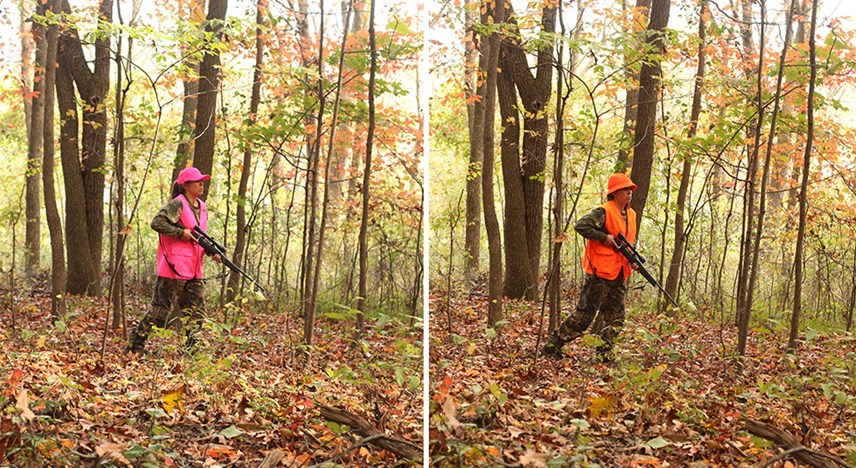 Blaze pink and blaze orange are unnatural colors and standout in a woodland setting.

During this introductory period of blaze pink laws, states have met resistance to the proposal of the new safety color. Wording on some proposals for the laws have mentioned offering pink as a way to “attract” more women to hunting. Many female hunters believed this was a demeaning approach by suggesting that the act of simply offering a fashionable color choice would boost the number of women willing to pursue the sport. Still others think it’s best to stick with one safety color that universally designates a hunter in the woods.

The color pink has a long and storied history. Worldwide it has been a significant color throughout all cultures. It wasn’t until the 1940s, in the United States, that it began being marketed as a girl’s color, which then was halted during the feminist movement of the 1960s. During that time “neutral” colors remained in vogue; yellows, oranges, browns and greens dominated clothing and toy colors and baby rooms until about the mid-1980s. Clothes and toys could be shared and handed down to other siblings regardless of gender. Later during the ‘80s, it became popular again to designate colors specifically for girls and boys. Pink merchandise took off and has staked its claim in our culture, from infantile innocence to a power color. The color pink has become synonymous with raising awareness about breast cancer, and now blaze pink is trying to blaze a new trail in the hunting community. 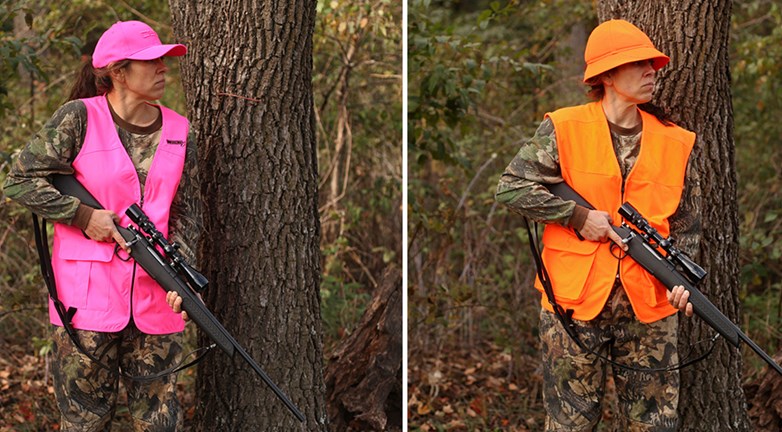 The launch of the new hunter pink color in 2016 garnered marketing opportunities for safety gear. As initial enthusiasm for the color faded however, many outdoor clothing companies began dropping their blaze pink apparel options. One woman, however, saw a void that she thought was important to fill.

Wendy Gavinski started DSG Outerwear as a snowmobile/ski clothing company for women. In 2017, after hearing about Wisconsin’s new blaze pink law, her company added a line of women’s hunting clothes. Among its multi-climate camouflage patterns, it offers blaze pink and orange bib overalls, jackets, hats, caps, gloves and vests. DSG Hunting pro staffer Rachelle Hedrick emphasizes they are a female-specific gear company, as opposed to some companies where a women’s line is usually an afterthought. DSG Outwear is designed, created and fitted by women. It utilizes feedback from women staffers and professionals who use their gear. Hedrick said they offer their clothing in a wide range of sizes from XXS to 5XL, with a size chart to help customers select the best fit.

Which blaze garment you choose can depend on the type of hunting you are doing. In many states, archery and muzzleloader hunters are not required to wear blaze apparel and can dress head-to-toe in camouflage. Others just require a blaze hat, at minimum, during rifle seasons. A few, like Colorado, are very specific in their requirements, stating that hunters must wear 500 square inches of solid blaze orange or pink, in addition to a hat, and blaze camo doesn’t count. In Arkansas, chartreuse (“safety yellow”) is an approved hunting blaze color. It’s best to check with your state’s hunting regulations to see what the hunter safety color requirements are; DSG Outerwear also has a list on its blog.

“A simple vest is a perfect thing to grab,” Hedrick explained, as you can throw it on over your other hunting camo. DSG also offers 3-in-1 insulated jackets that include a fleece liner that is also fluorescent to ensure that you maintain high-visibility even if you need to shed a layer while out in the field. Hedrick said their blaze gear is also popular for non-hunting activities, like hiking, biking or walks throughout the fall season.

If you are a hunter who loves wearing pink, and it’s not a legal blaze option in your state, you can still opt to wear it, just be sure to add the adequate amount of orange to your outfit. The most important factor is to be seen and to be safe while you are hunting, whether you choose orange or pink. 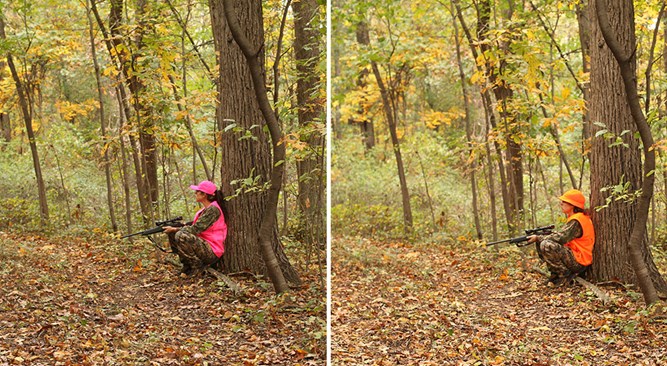 Hunting Guns in Colonial America | An Official Journal Of The NRA

END_OF_DOCUMENT_TOKEN_TO_BE_REPLACED

ICYMI: How to Gift a Gun; Cutting Costs at the Range; Why You Made Our Hearts Swell

How to Give a Gun as a Gift

Buying a gun as a gift for a friend or family member seems like a great idea, but there are some things you need to know.

3 Things NOT to Buy Your Gun Girl for Christmas

Shopping for a gun girl this year? Here are a few things she doesn’t want.

A woman who was being beaten and choked by her abusive husband was able to defend her life.

Here's why we are thankful for you, our NRA Women community.

S&W isn't waiting for 2022 to update your favorite line of pistols with the features you want most.

END_OF_DOCUMENT_TOKEN_TO_BE_REPLACED

NRA Blog | The Winnebago County Sheriff's Office, Going Above and Beyond

News, thank the women of the NRA, Refuse To Be A Victim
END_OF_DOCUMENT_TOKEN_TO_BE_REPLACED