It's not often that a new product announcement makes me finally admit something about myself, but today's news about Deer Camp Coffee's new "Huntress" flavor of ground coffee has achieved just that. As it turns out, although the delicious and life-giving dose of caffeine contained therein should be the same regardless of the packaging, putting pink Realtree EDGE camo on my java does indeed make me want to bring a few bags with me to my next hunting camp. Furthermore, as little as I like to admit to the cliche of women as inveterate chocolate lovers, making the coffee smell and taste of delicious, life-giving cacao sharpens that same desire. If that makes me as basic as 2+2, well, I guess I'll take it. 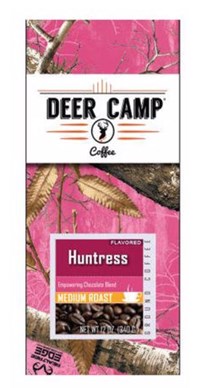 Huntress Chocolate Medium-Roasted Ground Coffee in Realtree EDGE Camo Colors was created to celebrate female archers and gun hunters, not call me out personally. It joins the "Deer Camp" line, which features such flavors as "The Rut," "Blaze Orange" and "Holiday Hunt," all decked out in Realtree camo. They're also all known for freshness, taste, quality and consistency, with a proprietary blend of coffee beans medium-roasted to make every cup as good as the first morning of deer season.

Deer Camp Coffee reports that their Huntress blend "embodies the excitement of opening day and the rituals and camaraderie of the hunt, such as setting up camp, preparing delicious meals, storytelling by the campfire and the fresh scent of dawn." Although I leave the detection of those flavor notes to palates far more sophisticated than mine, women who hunt can enjoy Deer Camp Huntress coffee as a cold brew, iced coffee or a pour-over flavoring for ice cream.

Want some of your own? Deer Camp Coffee products are available at Walmart, Amazon, independent retailers and more; check out the Deer Camp Coffee Realtree featured collection at deercampcoffee.com.

END_OF_DOCUMENT_TOKEN_TO_BE_REPLACED

News, thank the women of the NRA, Refuse To Be A Victim
END_OF_DOCUMENT_TOKEN_TO_BE_REPLACED