Shotgunning can be as much art as it is science.

Shooting a shotgun at a moving target is unlike other types of shooting to which you might be accustomed. For one thing, you’re shooting a pattern of individual pellets, not a single projectile as with a rifle or handgun. The target is moving—sometimes erratically, and always quickly. And the aiming is totally different: For starters, you don’t “aim” a shotgun at all (at least not at a moving target), but, rather, you point it. Your eye should keep focus on the target and you shouldn’t look at the gun. This is the opposite of pistol shooting, where your focus must remain on the front sight. Trying to adjust to this type of shooting can confound even talented shooters and hunters.

If you’re new to shotgun shooting and having some trouble breaking targets or hitting birds, be sure you’re not making one of these mistakes.

1. You’re Shooting a Gun That Doesn’t Fit
A good fit is important in all long guns, but particularly in shotguns. This is a complicated topic, but when you’re pointing a shotgun at a moving target, your eye essentially becomes the rear sight, and if it’s not settled in the proper position so that your “sights” are aligned, the gun will not shoot where you are looking, and you’ll miss every time. Gun fit and proper form go hand in hand, so see the next point for some simple tips to improve your form.

2. You Have Bad Form
Wingshooting shotguns are long and heavy, and new shooters naturally tend to lean back at the waist to compensate for all that weight they’re holding out in front of them. This is a mistake, as it gives the gun nothing substantial to recoil against, and you’ll get pushed around with each pull of the trigger.

Stand with your feet shoulder distance apart, with your nondominant leg slightly forward and your knees ever-so-slightly bent. Put more weight on your front foot than your back foot. Bring the gun to your face, planting it firmly against your cheek, nestling the buttstock into your shoulder. When you move to swing with the target, generate movement from your legs, not your arms or shoulders.

Practice mounting your unloaded shotgun at home until you can mount it to the same place every time. This is tricky to do if your gun doesn’t fit you—see point number one. 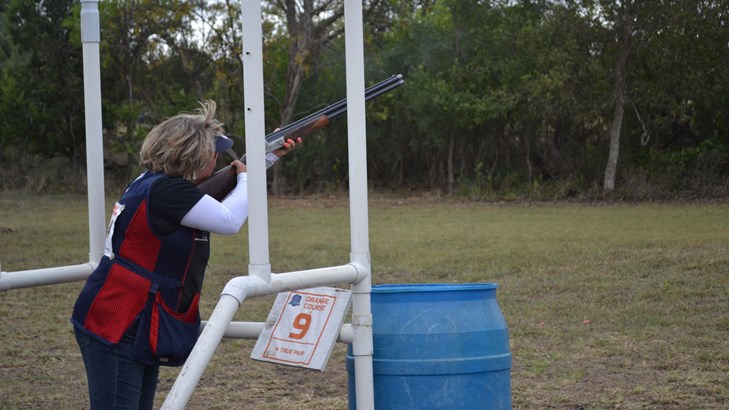 Correct: Weight on the front foot, gun firmly on the face at the moment the shot is triggered, in full control of the gun. The gun also fits the shotgunner properly, which is key.

3. You Started Too Big
It takes some time to build up a tolerance for recoil and to strengthen the muscles required to hold a shotgun out in front of you. Don’t let your enthusiasm carry you away—a 100-shot round of skeet or sporting clays is going to be plenty of shooting for one day at first, and maybe too much. If you have the option, start with a semi-automatic 20-gauge to minimize the felt recoil and let you shoot more rounds with less pain. No matter what gauge and gun configuration you start with, light loads are a good idea for clay target shooting. Go with 7/8-ounce or 1-ounce loads with a velocity of 1,100 feet per second (fps) or slower. Just be aware that some semi-auto shotguns have trouble cycling super light loads.

4. Assuming All Shotgun Sports Are Alike
Trap is not sporting clays, is not squirrel hunting, is not waterfowling, is not home defense. Each type of shooting requires different gear and different techniques. The best way to figure it out is to try them all! Check out our pointers on finding the right firearms training course for you.

5. You’re Using the Wrong Gear
Target shooting—skeet, trap and sporting clays—requires light loads with a small shot size, usually from size 9 to size 7 ½ depending on the discipline. Goose hunting calls for a heavier load with larger shot, sometimes as large as BB, and it must be nontoxic shot. There’s a whole spectrum in between, and using the wrong load or shot size will decrease your effectiveness.

Choke tubes matter, too. They control the density of your shot pattern, which makes a big difference downrange. Generally speaking, tighter chokes (full, modified) are for long shots, while more open chokes (skeet, improved cylinder) are for closer shots. Use a choke that’s too open and you might wound birds; use a choke that’s too tight and you’ll have a hard time hitting anything close.

6. You’re Overthinking It
Hitting a moving target is a game of angles, velocities and trajectories, among other things. You can’t do the math in your head quickly enough to figure out how much lead a target needs or how quickly you should swing the gun—you have to shoot a lot to build up a sense of how it works and what different target presentations look like. The good news is that your brain already knows what to do. You just have to get out of your own way and stop thinking about it so much. The bad news is that this is difficult to do.

Ever have a super-fast target pop up and you pointed the gun, swung and broke the target or killed that bird so fast you don’t even remember how it all happened? Your instinct took over because your conscious brain didn’t have time to get involved. Try not to overthink the shot or analyze what you should be doing.

7. You’re Getting Discouraged
This is tough stuff for new shooters. It’s not at all uncommon to break only a handful of targets out of 100 on your first round of sporting clays, for example. It takes time to get your mount right, get familiar with the proper stance, learn to move from your legs and body rather than your arms, and figure out how to get out of your own head and just let things happen.

You’ll probably miss a lot. You’ll probably mismount the gun when you’re rushed and end up with a tender spot on your upper arm or somewhere else the stock shouldn’t have been. It’s all part of learning, and the only way to get good at shotgun shooting is to keep doing it. If you’re really struggling and fear that you’re ingraining bad habits, seek out some instruction to get you on the right track.

END_OF_DOCUMENT_TOKEN_TO_BE_REPLACED

News, thank the women of the NRA, Refuse To Be A Victim
END_OF_DOCUMENT_TOKEN_TO_BE_REPLACED